Aina is an award winning actress and voice-over artist. She explained that in order to express ourselves authentically and to be present in the moment, it is crucial for our body, our mind and our voice to be in alignment.

She shared this from the point of view of an actress. She explained how she prepares for different roles, and how her body language and movement changes as she plays the same role in Catalan and then in Spanish. (Aina speaks both Spanish and Catalan as her mother tongue and performs in Barcelona, Madrid and also internationally.)

She mentioned how she perceives different audiences of different cultures when performing abroad, and also how an actor has the ability to convey a message even if the audience doesn’t speak the language of the performance.

Aina gave us practical tips on how we can be more ‘present’, how having the right posture can help to express ourselves in an authentic way, and she also explained why empathy is a crucial skill for any actor (clearly) but then also why vocal training and empathy go hand in hand.

Her talk was followed by questions from the audience, and then we chatted away until about 9pm over a drink or two, enjoying the company of fellow linguists, language professionals and language enthusiasts. 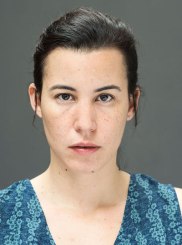 Aina Calpe Serrats is an award-winning actress and voice over artist born in the Mediterranean island of Mallorca. With a background in contemporary dance and violin performance, Aina started off her career in Barcelona’s ‘Institut del Teatre’, one of the most renowned schools of dramatic arts in Spain.

Best known amongst experimental filmmakers, Aina has featured in several international film festivals such as San Sebastian and Venice International Film Festival. Aina is also an established and celebrated actress in Barcelona’s theatre scene, having received the distinguished “Revelation Award” from the Theatre Critic’s Choice of Barcelona.

The convergence of languages, cultures, art and love have beckoned Aina to London to experiment a new vibrant chapter of her life, always looking for new frontiers, whatever they may be.

Feel free to reach out to Aina on LinkedIn and via her website: